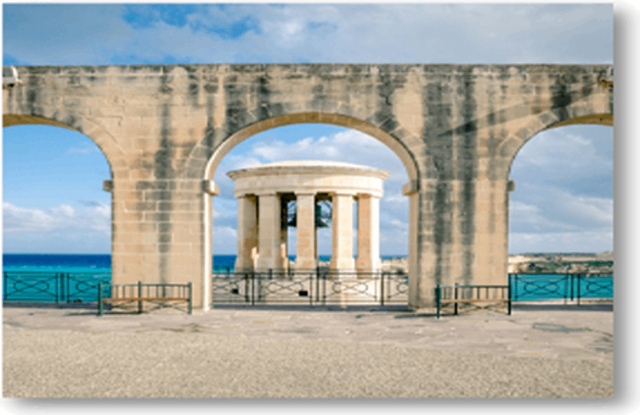 Malta is a small island country tucked away in the Mediterranean Sea, just off the coast of Italy. With few natural resources, an economy based on tourism and trade, and political turmoil throughout its ancient history, this country’s existence as an independent nation would be impossible without its strategic position in the middle of the Mediterranean Sea. Learn more about Malta in this travel guide to Malta!

Situated about 90 miles north of Libya, Malta is a sovereign island nation with a population just under 400,000. This European Union country is made up of three major islands—named from largest to smallest, Malta, Gozo, and Comino—and has been inhabited since 5000 B.C. Malta’s favorable location has ensured its growth over time, both militarily and economically. The Grand Harbour, which overlooks an impressive site that includes remnants of fortifications built by the British in 1878–1880, is now one of Europe’s busiest ports.Today Malta benefits from a highly developed economy and stable democracy with most citizens professing Roman Catholicism as their faith.

What Makes it Great

A European island with a rich history and warm people, Malta is an oasis of tranquility in the stormy seas of its surroundings. Malta is often called the land of hospitality due to its hospitable locals. A big draw for travelers is exploring ancient sites such as the Hal Saflieni Hypogeum, a Neolithic temple that features many rock carvings dating back to 4000 BC. For sun-seeking tourists, Malta offers some of the best beaches in Europe, including Sliema and St. Julians Bay - where you can find yourself on powder-white sand with crystal clear water all around you.

Getting Around on this Tiny Island

The most convenient way to get around Malta is by taking the bus, which runs on a timely schedule. You can purchase tickets from the bus driver. If you want to explore Malta at your own pace, renting a car is an option. Be aware that driving is on the left-hand side of the road. There are also many taxi services available, including rideshare services, but they might not be as readily available during hours of less traffic or when it's pouring rain outside.

Tips on How to Save Money While Visiting

Grocery stores are plentiful in Malta, and it’s less expensive to make your own food than to eat out the entire duration of your visit. If you would rather eat out, do some research ahead of time to find restaurants that offer local dishes on their menus. These might be more affordable or have larger portions than some of the other places you find while exploring Malta. While staying in hotels is certainly a good way to save money, if you have a little extra cash to spend and want the true Maltese experience, look into renting an apartment for your stay.

Festivals and Events Held on the Island

Throughout Malta's history, arts and crafts festivals have been an important part of Maltese culture. These events are typically centered around a specific theme. Traditional art forms that can be found at these festivals include music, theater, storytelling, and of course painting. One such festival is the Żejtuner tal-Bajda - one of Europe's few remaining walled villages with a population numbering just over 1,000 inhabitants.

Want to know even more about Malta? Check out our previous, “3 Can’t-Miss TV Shows and Movies Filmed in Malta”!