Discover three different sides of Thailand in one wide-ranging 11-night vacation: the glitz of Bangkok, the mist-swathed hills of Chiang Mai, and the beaches of Phuket. Discover Thailand’s capital over four days, visiting gold-tipped palaces, Buddhist temples and floating markets. Next, head for Chiang Mai, the country’s northern capital, renowned for its rich Lanna heritage, hill temples and deep jungles.  Finally, delight in the palm-fringed sands of Phuket, one of Thailand’s most alluring islands. For the ultimate experience, customize your trip by adding on one or more of our optional tours and excursions, so creating your perfect, personalized itinerary. 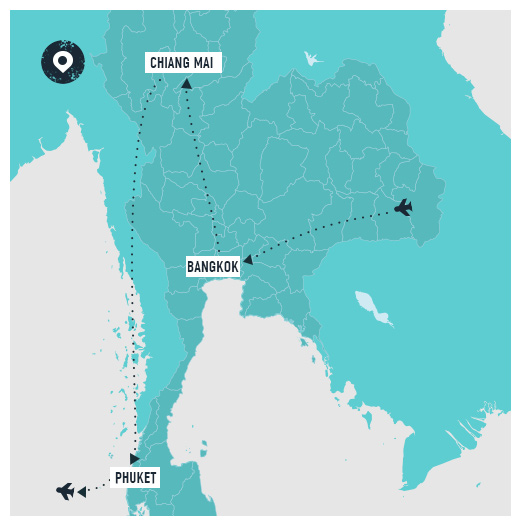 Our Thailand vacation starts as we board an international flight bound for Bangkok, the "City of Angels".  *Thailand entry visa is not required for U.S citizens, effective for the duration of 30 days . Non-US passport holders, please contact your local Thai Consulate regarding Thailand Visa requirements.

Touch down in Bangkok, Thailand's vibrant capital city.  Meet your guide at the Bangkok airport and enjoy a convenient transfer to your hotel.  Enjoy the rest of the evening free at leisure, perhaps relaxing at the hotel or exploring this exhilarating city's mix of East and West.

Depart on a half-day tour after breakfast to witness some of Bangkok’s most interesting sights. Visit the Temple of the Golden Buddha (Wat Trimitr) to see its solid-gold Buddha, and peek inside the Temple of the Reclining Buddha (Wat Pho), known for its monumental horizontal Buddha. Pass by the Paklong Talat flower market, a whirlwind of stalls selling masses of perfumed orchids, marigolds and roses.  After a buffet lunch at a local restaurant, enjoy the afternoon independently, or explore Bangkok’s must-sees on our optional Landmark of Bangkok tour. Tour the splendid Grand Palace and Temple of the Emerald Buddha, see the riverside Temple of Dawn (Wat Arun), and ride a motorboat along the Chao Phraya River.

*Men and women must have their shoulders, arms and legs covered when visiting the Grand Palace and Emerald Buddha Temple*

Following breakfast, depart Bangkok for Damnoen Saduak, one of Thailand’s most famous floating markets. Ride a long-tail speedboat around the lively canals, passing boats and stalls laden with fresh produce, spices, and handicrafts. Continue to a local gem workshop and silk factory to see how these precious items are produced for sale, and perhaps purchase some as souvenirs. After returning to Bangkok, spend the evening as you wish or enjoy our optional dinner cruise on the Grand Pearl ship along the Chao Phraya River.

A free day beckons, giving you the opportunity to explore and enjoy Bangkok on your own. Alternatively, make the most of your time with our optional full-day Elephant World Sanctuary and River Kwai excursion. After an early start, travel into scenic Kanchanaburi province and visit the Elephant World Sanctuary for rescued elephants. Admire, feed and help bathe these incredible animals in the river before enjoying lunch at the camp. Later, visit the Bridge over the River Kwai, famously connected to the ‘Death Railway’ of World War II, and the poignant Kanchanaburi War Cemetery, home to 9,000 Allied war graves.

After breakfast, fly to Chiang Mai, dubbed Thailand’s ‘Rose of the North,’ and home to over 1.5 million people. On arrival, enjoy a fascinating introduction to this majestic city, whose streets have spilled beyond the medieval walls that defined it as the capital of the northern Lanna Kingdom. After exploring one of the oldest temples, Wat Suan Dok, enjoy a panoramic drive around the old city, seeing the moat and ruins of the city gates. Then, discover Chiang Mai’s rich culture with a visit to the bustling Warorot Market.  Enjoy this evening at leisure, or join our optional Lanna Kantoke excursion to experience the food and culture of northern Thailand.

Enjoy the day to yourself today, or why not join our optional Spirit of Chiang Mai tour and experience the highlights and hidden treasures of this colorful city.  Discover the village and the customs of the Long-Necked Karen Hill Tribe.  Afterward, pay a visit to Doi Suthep Temple, an important gold-coated shrine set on Doi Suthep Mountain. Climb up to this 14th-century place of worship, one of northern Thailand’s most sacred, and admire views of the holy relic of Buddha embedded in the golden pagoda and the bird’s-eye views down over Chiang Mai from the hillside.

Spend today as you wish or explore the beautiful Chiang Mai region further on our optional Chiang Rai, Golden Triangle and Don Sao Island of Laos day trip. See the fairy tale-like Maekhajan hot springs and temples of Wat Rong Khun and Wat Chedi Luang, and then drive through verdant countryside to the Golden Triangle, once a hub of the opium trade and the place where Thailand, Myanmar and Laos meet. Savor a delicious Thai lunch, and enjoy a boat ride along the Mekong River to visit Don Sao, an island located over the Laos border, which is home to an Opium Museum. Visit the museum and a local market before returning to Chiang Mai.

This morning, transfer to Chiang Mai airport for your short flight to Phuket, the biggest of Thailand’s islands. Measuring 30 miles long and 13 wide, this island in the Andaman Sea is famed for its white sands, crystal-clear seas and lush rainforests. Check in to your hotel, relax and soak in the gorgeous tropical setting.  Enhance your Phuket stay further by upgrading your hotel to the Dusit Thani Laguna Phuket's and stay in one of their timeless rooms facing the breathtaking Andaman Sea.  Enjoy the rest of the evening free at leisure or perhaps join our optional Patong by Night tour.

Enjoy the day at leisure today, perhaps luxuriating in your hotel’s beaches, pool or other amenities. Alternatively, you may fancy our full-day trip to Phang Nga Bay, an idyllic area of limestone islands, caves and mangroves.   The tour starts with a visit to Phang Nga province where we will visit the Buddha Cave Temple (Suwannakuha), also known as Monkey Temple.  Our jouney continues with a visit to Ao Phang Nga National Park   This scenic area covers over 40 limestone islands, caves, rock formations and evergreen mangroves.  Ride a long-tail boat around the bays, admire the famous James Bond Island, where parts of the movie ‘The Man with a Golden Gun’ was filmed. Enjoy lunch at the stilted Sea Gypsy Village before returning to Phuket.

*Please note as of October 2nd, Maya Bay will be closed indefinitely.  A vist to either Pileh Lagoon or Rantee Bay will replace Maya Bay until further notice.

Start today with a morning sightseeing tour of Phuket. Admire the island’s porcelain-white beaches and take a drive to the Old Town to view its historic Sino-Portuguese architecture. Stop to take in the spectacular views of the local coastline and nearby islands from Promthrep Cape, and explore other scenic and cultural highlights.

For guests taking Cathay Pacific flights, after breakfast, we bid farewell to Thailand and board the return flight back home. For guests taking Air China or China Eastern flights, you have the full day to relax or explore the city before we depart for the airport later in the evening. Late check-outs are available for purchase if you wish to enjoy your hotel room until our evening departure.  Otherwise, the hotel standard check-out time will be at 12 noon today.  **The flight back to the U.S. via Air China and China Eastern departs in the early morning on the following day.

Create your ideal getaway with the following upgrade options. Extensions and upgrades can be added during the booking process.

*Subject to availability; extension and upgrade options vary by tour

The Landmark of Bangkok Tour with Boat Ride

[Shared coach basis]
Visit Bangkok’s signature sights — the Grand Palace — and its famous Temple of Dawn (Wat Arun) and the Temple of Emerald Buddha on an afternoon sightseeing tour, including a boat ride on the Chao Phraya River.

After pickup from your Bangkok hotel, travel to the Grand Palace, the landmark that tops Bangkok’s

[Shared coach basis]
Drift along the Chao Phraya River past Bangkok’s illuminated landmarks on this memorable dinner cruise by the luxurious Grand Pearl River Cruise.  Step aboard and enjoy a welcome cocktail as you set sail. Cruise upriver and stop for photos of highlights such as the Temple of Dawn (Wat Arun), the spires of

[Shared coach basis]
Venture into Thailand’s scenic Kanchanaburi province to an elephant sanctuary and the Bridge over the River Kwai on this full-day excursion from Bangkok. After breakfast,  travel into the Thai countryside and visit Elephants World, a sanctuary for rescued elephants. Meet the elephants and prepare rice balls and fruit to feed them before

Celebrate an evening in Chiang Mai with a traditional Lanna Kantoke dinner show, featuring classic dance and cuisine from Lanna, the Thai name for northern Thailand’s lands, customs, art, music and culture. Begin with pickup from your Chiang Mai hotel and travel to an authentic local restaurant-cultural center for an unforgettable evening.

Head inside and settle

This morning, journey from Chiang Mai to a village of the Long-Necked Karen hill tribe, the largest hill tribe in Thailand.  Discover the rich culture of this ancient community.  Meet some of the Karen women, who famously wear high-stacked brass rings around their necks.  Afterwards, savor a traditional Thai lunch at a nearby orchid farm.

[Shared coach basis]
Spend an exciting evening at Patong’s night market and relax over a sumptuous seafood BBQ and international buffet dinner on this evening excursion. After pickup at your hotel, travel to Patong Beach, the heart of Patong’s nightlife district, and enjoy a delicious dinner featuring a seafood BBQ and international buffet spread*. After your

[Shared coach basis]
Ride a boat around the dream-like scenery of Phang Nga Bay on this 9-hour excursion from Phuket. After pickup from your Phuket hotel, travel overland into Phang Nga province to the Buddha Cave Temple (Suwannakuha), sometimes called Monkey Temple for its resident monkeys. Enter the cave to admire its Buddha statues and

[Shared coach basis]
Spend a day in the paradise-like Phi Phi islands, a gorgeous archipelago of islands off Phuket, on this 7-hour speedboat excursion. Cruise over the azure waters of the Andaman Sea and marvel at the sight of the islands rising from the sea like giant, rounded rock spears. Then, enjoy an unforgettable few