Enigmatic Beijing, cutting-edge Tokyo, enthralling Bangkok, and the white sands of Phuket —this 12-night experience blends them into a sparkling introduction to Asia.  Start with three nights in Beijing, China’s vast capital, seeing highlights such as the Forbidden Palace, Tiananmen Square, and the Great Wall. From there, head for Tokyo, Japan’s electrifying capital and a fascinating mix of old and new. View everything from its ornate temples to teahouses. Seize the opportunity to discover traditional Japanese culture, the picturesque seaside city of Kamakura and more of this intriguing country’s cities. Next comes Bangkok, where gleaming Buddha statues, skyscrapers, and floating markets are crowned by a spectacular Royal Palace complex. Your tour finishes with three nights in Phuket, Thailand’s biggest island. Basking in the Andaman Sea and hemmed by idyllic beaches and turquoise waters, this tropical gem is perfect for slowing the pace and unwinding after your explorations. 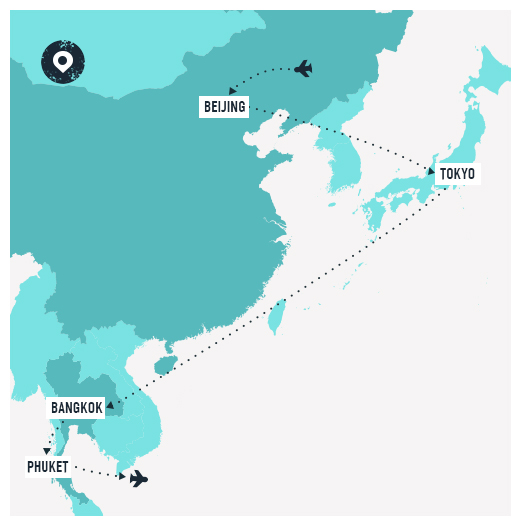 Board an international flight bound for Beijing, eager to begin our Asia vacation. Spend the night aboard as our flight crosses the International Date Line.

We arrive in Beijing, the capital city of China (Day 2). Greet our local guide in the arrival’s hall and transfer to your hotel for a good night’s rest.

After breakfast, begin your explorations of China’s fascinating capital. Your tour starts at Qianmen Street, a pedestrianized walkway of rebuilt Ming- and Qing-dynasty shops and courtyards. Admire the ornate architecture and buildings, and then visit the world-famous and historic Tiananmen Square, or “Gate of Heavenly Peace”. Located in the heart of Beijing, Tiananmen Square was once the main gate to the Imperial Palace during the Ming (1368-1644) and Qing (1644-1911) dynasties. Today, it is home to the Monument to the People’s Heroes, Mao Zedong Memorial Hall, National Museum of China, and the Great Hall of the People.  Stroll around to see its landmarks, including the Monument to the People’s Heroes, before heading to the Beijing 2008 Olympics complex for photo stops at the instantly recognizable ‘Bird's Nest’ and Aquatics Center ‘Water Cube’ stadiums.

This afternoon brings the opportunity to explore the famous Forbidden City, once the exclusive reserve of China’s emperors. Comprising 800 buildings, this sprawling city-inside-a-city is the world’s largest palace complex, covering 720,000 sq. meters, and a wonder to explore.

Spend today as you wish or join our optional tour to China’s Great Wall and Sacred Way. Building on the wall began in 200 BC, and it was believed to stretch for an unbroken 4,000 miles (6,400 kilometres) across northern China during the Ming dynasty.  Travel to one of its best-preserved sections and walk its battlements to absorb their history and views. Afterwards, visit the Sacred Way—a statue-lined pathway walked by China’s imperial families to visit their ancestors’ tombs.

Check out after an early breakfast today and transfer to Beijing airport for your flight to Tokyo. Upon arrival in Tokyo Narita International Airport, you will be greeted by our friendly ground representative and guided to the airport shuttle bus for a shared transfer to the hotel. Check-in and unwind for the remainder of the day.  Enjoy the amenities at your hotel and perhaps head out later to sample Tokyo’s vibrant shops and restaurants on your own.

Don your explorer’s hat for a Tokyo city orientation tour this morning. Visit the Imperial Palace Plaza —a magnificent park of palaces, lakes, and bridges—that is home to Japan’s Imperial family, and then explore Asakusa, Tokyo’s old town, to see its old Senso-ji Buddhist temple. Browse the craft, food, and souvenir stalls of the traditional street that leads to the temple before exploring its elaborate interior. Finally, dive into the Ginza district —Tokyo’s upscale shopping district of high-end boutiques and flagship stores. Stroll and shop here before a transfer back to your hotel, or opt to stay longer and return independently.

This evening— if you have pre-booked prior to your vacation—enjoy an optional Japanese Kaiseki dinner—a traditional multi-course meal of perfectly balanced tastes, textures, and colors. Savour the fresh seasonal ingredients and carefully harmonized flavors, all brought together in beautifully designed dishes—a quintessential Tokyo experience.

Today is free for you to enjoy Tokyo the way you prefer. Maybe visit a teahouse, chart Japan’s history at a museum, or shop at the city’s ultra-contemporary stores. Alternatively, take our optional day trip to Kamakura and Yokohama—two of the country’s most interesting cities. Depart from your Tokyo hotel and travel southwest by coach to Kamakura, a picturesque seaside city nestled in forested hills on Sagami Bay renowned for its Buddhist temples, Shinto shrines and rich history.   After exploring Kamakura, head for Yokohama, Japan's second-largest metropolis. This cosmopolitan city offers up attractions such as the Red Brick Warehouse—where early 20th century custom buildings now house trendy shops—and the waterfront Yamashita Park, both ideal for exploring.

Today begins with an early transfer to Tokyo’s Haneda Airport for your flight from Tokyo to Bangkok (via Beijing).  Arriving in Thailand’s capital in the early evening, enjoy a convenient transfer to your hotel and spend the remainder of the evening resting and recharging your batteries.

Bangkok blends glittering modernity with age-old Buddhist tradition. This morning, discover the older side of the city on a half-day tour. Visit the Temple of the Golden Buddha (Wat Trimitr) to admire its solid-gold Buddha, inspect the huge horizontal Buddha at the Temple of the Reclining Buddha, and pass by the colorful Paklong Talat flower market, where the stalls are swathed in roses, orchids, and marigolds. After a buffet lunch at a local restaurant, enjoy a free afternoon, or take our optional Landmarks of Bangkok tour. Tour the spectacular Grand Palace with its Temple of the Emerald Buddha; roam the elaborate Temple of Dawn and ride a motorboat along the city’s Chao Phraya River.

*Please note, Men and Women must have their shoulders, arms and legs covered when visiting the Grand Palace and Emerald Buddha Temple*

After breakfast, travel to Thailand’s most celebrated floating market—Damnoen Saduak. Chug along the stall-flanked canals by long-tailed boat, passing boats and stalls laden with fresh produce, spices, and handicrafts. Continue to a local workshop to witness how gemstones and silk are processed before returning to Bangkok. Enjoy this evening at leisure, or join our optional dinner cruise on the Grand Pearl ship along the Chao Phraya River.

This morning, fly to the famous island of Phuket, set in the stunning Andaman Sea. On arrival, transfer to your hotel and soak in the gorgeous tropical setting.  Elevate your Phuket stay by upgrading to the Dusit Thani Laguna Phuket and stay in one of their timeless rooms facing the breath-taking Andaman Sea.  Afterwards, get acquainted with Phuket on a city tour around its highlights. View its gorgeous beaches and temple-filled Old Town, and visit Promthrep Cape for stunning views over its palm-fringed shores. The remainder of the day is free for you to do as you wish.

Enjoy the day at leisure today, perhaps luxuriating in your hotel’s beaches, pool or other amenities.  Venture out this evening with an optional tour of the buzzing Patong Night Market.

Lounge at your hotel beach or pool today, or if you fancy getting active, take our optional day trip to Phang Nga Bay—a paradise of limestone islands, caves and mangroves.  After seeing the Buddha Cave Temple—sometimes dubbed the Monkey Temple—in Phang Nga, continue to Ao Phang Nga National Park, where limestone peaks rise from emerald seas. Cruise the bays by long-tail boat, passing the ‘James Bond’ island where scenes from ‘The Man with the Golden Gun,’ were shot, and stopping for lunch at a floating village before returning to Phuket.

Enjoy the full day to relax or explore the city before we depart for the airport later in the evening. The hotel standard check-out time will be at 12 noon today; late check-outs are available for purchase if you wish to enjoy your hotel room until our evening departure. Alternatively, head out on our optional Phi Phi Island tour to experience more of this gorgeous region. A speedboat whisks you to the islands to laze on white beaches, snorkel in the Andaman Sea, and explore beauty spots such as Pileh Lagoon, the Viking Cave, and Monkey Beach. Later this evening, transfer to the airport for your flight back to the US.

Create your ideal getaway with the following upgrade options. Extensions and upgrades can be added during the booking process.

*Subject to availability; extension and upgrade options vary by tour

Forbidden City (only available for purchase prior to trip departure date**)

Turn back time to the days of China’s great emperors on a 4-hour optional tour of Beijing’s historical showpiece: the UNESCO-protected Forbidden City. Located on the northern edge of Tiananmen Square in the heart of China’s vast capital, this gargantuan walled palace was the residence and political base of 24 emperors of the Ming and

Stride along the Great Wall of China and visit  the Sacred Way of China’s past emperors on this fascinating 8-hour optional day trip from Beijing.

After pickup from your hotel in the city, soak in views of Beijing’s suburbs and rural China as you travel north to one of the most scenic sections of the Great

Kaiseki Dinner (Min. 5 participants - only available for purchase prior to trip departure date)

**Please note this is a set menu and will include dishes that contain meat and/or fish.  We apologize but special meal requests cannot be accommodated.**

Explore two of Japan’s most captivating cities on a full-day Kamakura and Yokohama trip from Tokyo. After pickup from your Tokyo hotel, travel southwest by coach to Kamakura, a picturesque seaside city nestled in forested hills on Sagami Bay renowned for its Buddhist temples, Shinto shrines and rich history.

The Landmark of Bangkok Tour with Boat Ride

Visit Bangkok’s signature sights — the Grand Palace — and its famous Temple of Dawn (Wat Arun) and the Temple of Emerald Buddha on an afternoon sightseeing tour, including a boat ride on the Chao Phraya River.

After pickup from your Bangkok hotel, travel to the Grand Palace, the landmark that tops Bangkok’s must-see list.  Head

Drift along the Chao Phraya River past Bangkok’s illuminated landmarks on this memorable dinner cruise by the luxurious Grand Pearl River Cruise.  Step aboard and enjoy a welcome cocktail as you set sail. Cruise upriver and stop for photos of highlights such as the Temple of Dawn (Wat Arun), the spires of the Grand Palace

Spend an exciting evening at Patong’s night market and relax over a sumptuous seafood BBQ and international buffet dinner on this evening excursion. After pickup at your hotel, travel to Patong Beach, the heart of Patong’s nightlife district, and enjoy a delicious dinner featuring a seafood BBQ and international buffet spread*. After your meal, enjoy

Ride a boat around the dream-like scenery of Phang Nga Bay on this 9-hour excursion from Phuket. After pickup from your Phuket hotel, travel overland into Phang Nga province to the Buddha Cave Temple (Suwannakuha), sometimes called Monkey Temple for its resident monkeys. Enter the cave to admire its Buddha statues and take photos of

Spend a day in the paradise-like Phi Phi islands, a gorgeous archipelago of islands off Phuket, on this 7-hour speedboat excursion. Cruise over the azure waters of the Andaman Sea and marvel at the sight of the islands rising from the sea like giant, rounded rock spears. Then, enjoy an unforgettable few hours hopping from